Something about Bowling ( Chapter Ⅱ )

In 1299 the oldest known bowling green for target style bowling to survive to modern times was built. Master's Close (now the Old Bowling Green of the Southampton Bowling Club) in Southampton, England is still in use.

In 1325 laws were passed in Berlin and Cologne limiting bets on lawn bowling to five shillings.

In 1366 the first official mention of bowling in England was made, when King Edward III banned it as a distraction to archery practice.

In the 15th-17th centuries lawn bowling spread from Germany into Austria, Switzerland, and the Low Countries, with playing surfaces made of cinders or baked clay.

In 1455 lawn bowling lanes in London were first roofed-over, turning bowling into an all-weather game. In Germany, they were called kegelbahns, often attached to taverns and guest houses.

In 1463 a public feast was held in Frankfurt, Germany, with a venison dinner followed by lawn bowling. 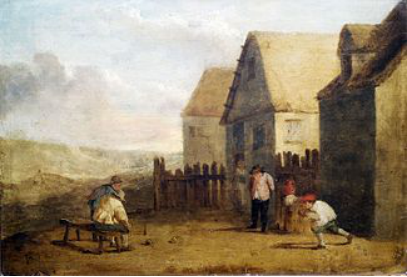 Peasants bowling in front of a tavern in the 17th century

In 1511 English King Henry VIII was an avid bowler. He banned bowling for the lower classes and imposed a levy for private lanes to limit them to the wealthy.  Another English law, passed in 1541 (repealed in 1845), prohibited workers from bowling, except at Christmas, and only in their master's home and in his presence. In 1530 he acquired Whitehall Palace in central London as his new residence, having it extensively rebuilt complete with outdoor bowling lanes, indoor tennis court, jousting tiltyard, and cockfighting pit.

Protestant Reformation founder Martin Luther set the number of pins (which varied from 3 to 17) at nine. He had a bowling lane built next to his home for his children, sometimes rolling a ball himself.

On 19 July 1588 English Vice-Admiral Sir Francis Drake allegedly was playing bowls at Plymouth Hoe when the arrival of the Spanish Armada was announced, replying "We have time enough to finish the game and beat the Spaniards too." 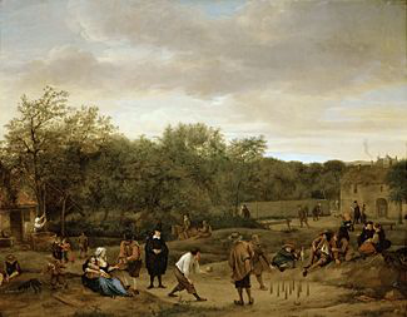 In 1617 English King James I published Declaration of Sports, banning bowling on Sundays but permitting dancing and archery for those first attending an Anglican service, outraging Puritans; it was reissued in 1633 by his successor Charles I, then ordered publicly burned in 1643 by the Puritan Parliament.

In 1670 Dutchmen liked to bowl at the Old King’s Arms Tavern near modern-day 2nd and Broadway in New York City.

In 1733 Bowling Green in New York City was built on the site of a Dutch cattle market and parade ground, becoming the city's oldest public park to survive to modern times.

In the 19th century

A painting from around 1810 shows British bowlers playing a bowling sport outdoors. It shows a triangular formation of ten pins chronologically before it appeared in the United States.

In 1819, New York writer Washington Irving made the first mention of ninepin bowling in American literature in his story Rip Van Winkle.

In 1846, the oldest surviving bowling lanes in the United States were built as part of Roseland Cottage, the summer estate of Henry Chandler Bowen (1831-1896) in Woodstock, Connecticut. The lanes, now part of Historic New England's Roseland Cottage House Museum contain Gothic Revival architectural elements in keeping with the style of the entire estate.

In 1848, the Revolutions of 1848 resulted in accelerated German immigration to the U.S., reaching 5 million by 1900, bringing their love of beer and bowling with them; by the late 19th century they made New York City a center of bowling.

In 1848, the Scottish Bowling Association for lawn bowling was founded in Scotland by 200 clubs; it was dissolved then refounded in 1892. 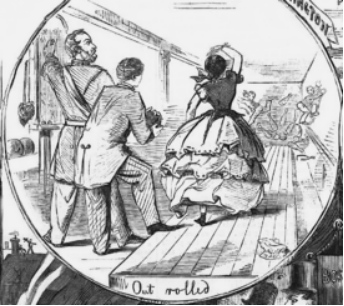 A tongue-in-cheek illustration of a bowling alley, from the cover of Harpers Weekly magazine (U.S., 1860)

In 1875, the National Bowling Association (NBA) was founded by 27 local clubs in New York City to standardize rules for ten-pin bowling, setting the ball size and the distance between the foul line and the pins, but failing to agree on other rules; it was superseded in 1895 by the American Bowling Congress.

On 9 September 1895, the modern standardized rules for ten-pin bowling were established in New York City by the new American Bowling Congress (ABC)(later the United States Bowling Congress), who changed the scoring system from a maximum 200 points for 20 balls to a maximum 300 points for 10 balls, and set the maximum ball weight at 16 lbs., and pin distance at 12 inches. The first ABC champion (1906-1921) was Jimmy Smith (1885-1948). In 1927 Mrs. Floretta "Doty" McCutcheon (1888-1967) defeated Smith in an exhibition match, founding a school that taught 500,000 women how to bowl. In 1993 women were allowed to join the ABC. In 2005 the ABC merged with the Women's International Bowling Congress (WIBC) et al. to become the United States Bowling Congress (USBC). 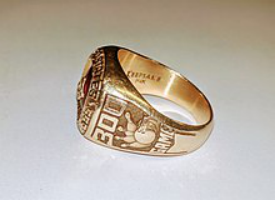 The ABC initially used bowling balls made of Lignum vitae hardwood from the Caribbean, which were eventually supplanted by the Ebonite rubber bowling ball (1905) and the Brunswick Mineralite rubber ball (1914). In 1980 urethane-shell bowling balls were introduced by Ebonite.

In the early 1890s, Duckpin bowling was invented in Boston, Massachusetts, spreading to Baltimore, Maryland about 1899.

The whole article copy from Wikipedia, the free encyclopedia. Copyright belongs to Wikipedia.